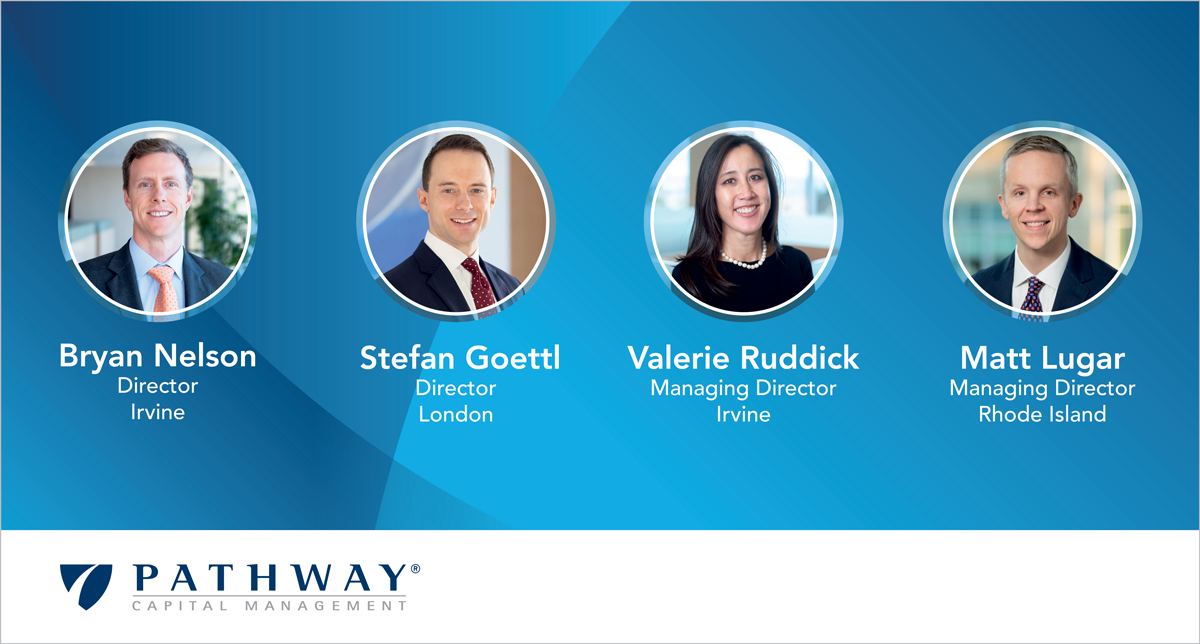 Pathway is pleased to announce that Bryan Nelson and Stefan Goettl have been promoted to Director and have become owners in the firm, and that Valerie Ruddick and Matt Lugar, both Managing Directors, have been named as co-heads of Pathway’s primary investing practice.

Valerie joined Pathway in 1996 and is a member of various Pathway committees, including the firm’s Investment Committee, Portfolio Construction Committee, and Diversity & Inclusion Committee. Matt joined Pathway in 2002, is based in the firm’s Rhode Island office, and serves on various Pathway committees, including the Investment Committee. Valerie and Matt also co-manage the firm’s Target Funds team, which oversees Pathway’s proactive investment origination efforts. 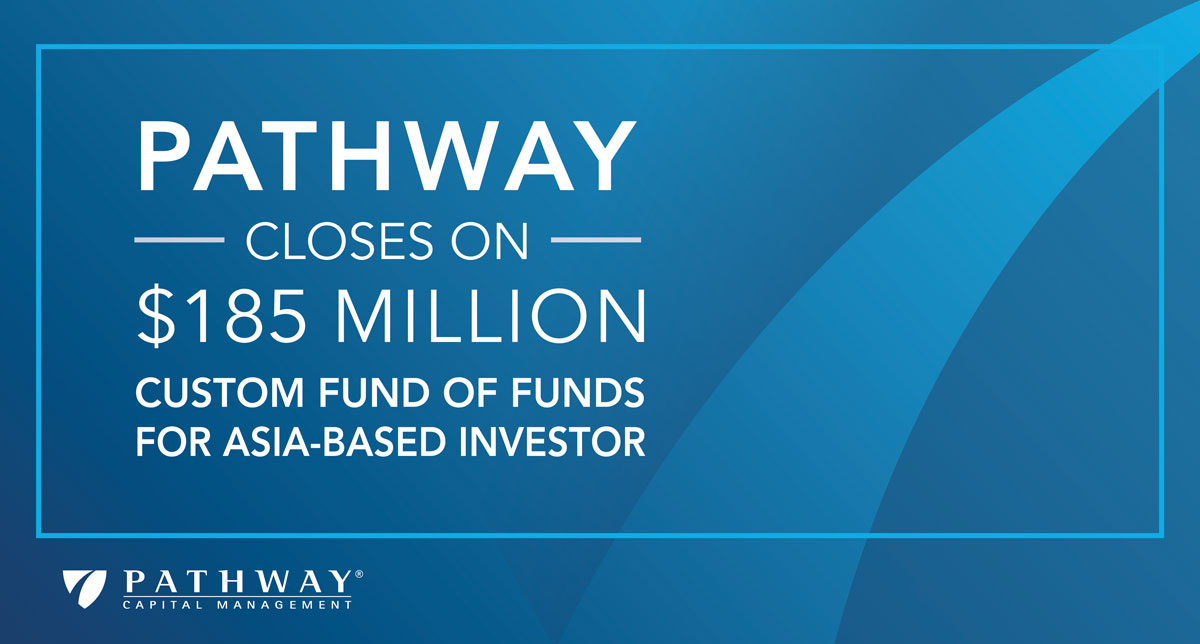 Pathway is pleased to announce that it has closed on a $185 million customized fund of funds for an Asia-based institutional investor. The fund will seek to build a diversified portfolio of primary fund investments and co-investments in both the small and middle markets globally.

The fund represents a continuation of Pathway’s successful 31-year history of investing in the private markets, which totals more than $105 billion in commitments. To date, Pathway has developed more than 100 customized solutions for our clients across private equity, private credit, and infrastructure mandates. 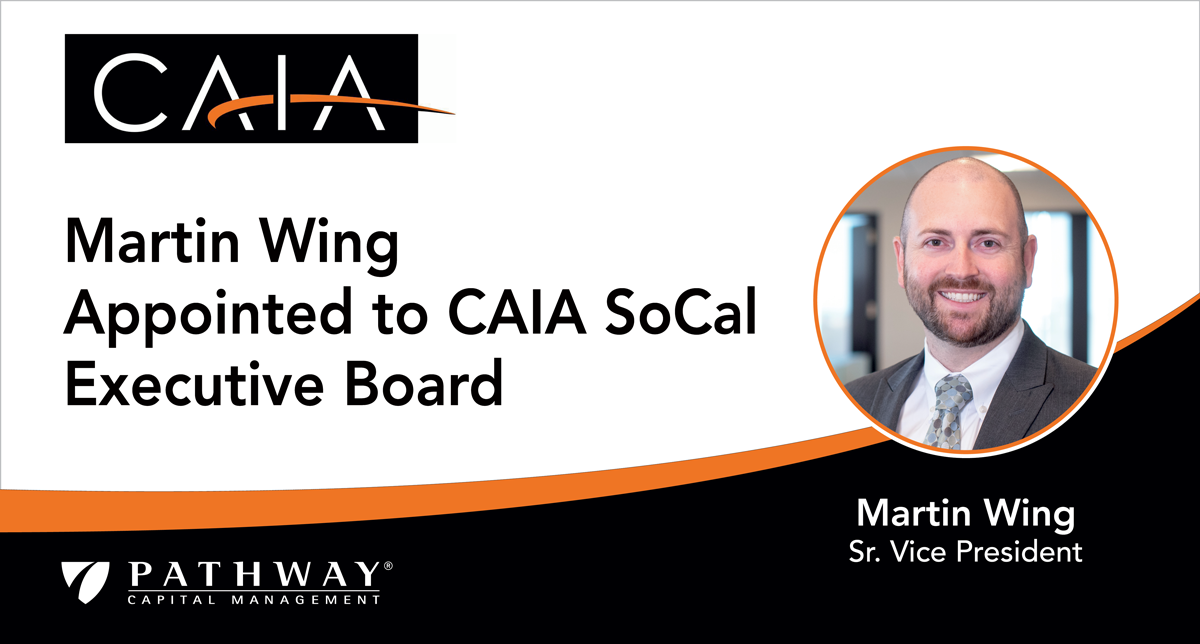 Pathway is delighted to announce that Martin Wing, senior vice president of consultant relations, has been appointed to the CAIA SoCal Executive Board in recognition of his in-depth knowledge of and experience in the institutional investment industry. Pathway is a proud supporter of CAIA Association’s mission to improve investment and societal outcomes of capital allocation through professional education, transparency, and thought leadership across all investor alternatives in our industry.

To learn more about CAIA and its mission, visit their website here.

We’ll explore the changing market landscape and what the future holds for infrastructure as the industry tackles the ongoing opportunities and threats relating to rising inflation, energy transition, government involvement, digitization, and the ongoing effects of COVID-19. 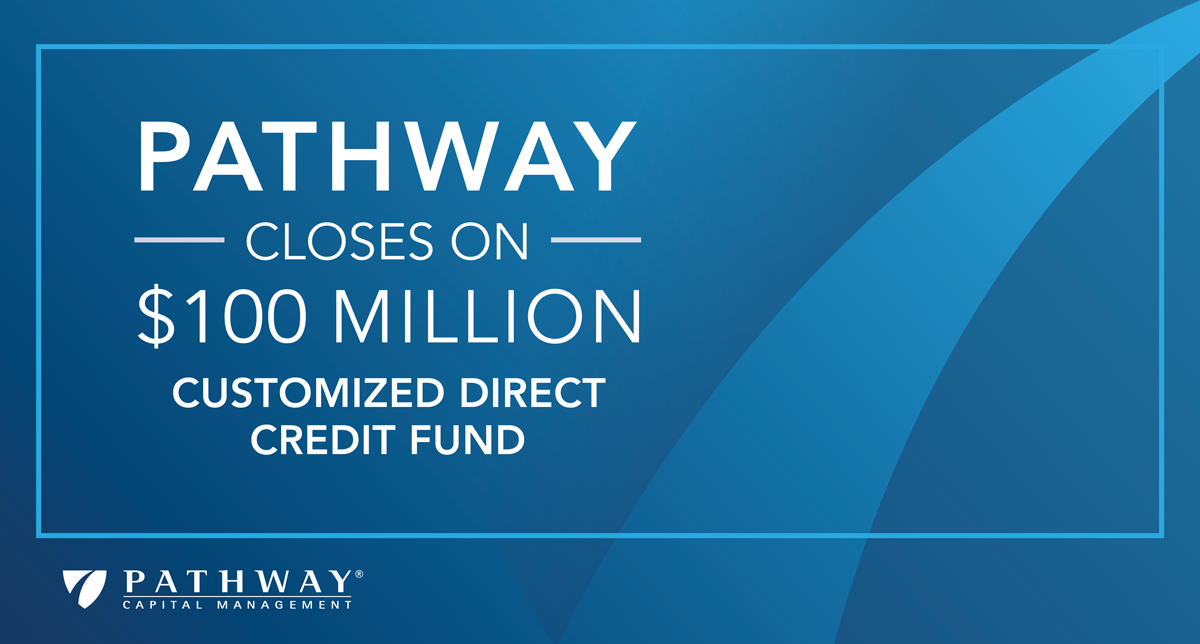 Pathway is pleased to announce that it has closed on a new customized $100 million direct credit fund for a U.S.-based public pension plan. The fund will seek to build a diversified portfolio of direct credit investments in private equity–backed companies that operate in a variety of industries and regions.

This fund represents a continuation of Pathway’s successful 31-year history of investing in private markets, which totals more than $100 billion in commitments. To date, Pathway has developed more than 95 customized solutions for our clients across private equity, private credit, and infrastructure mandates. 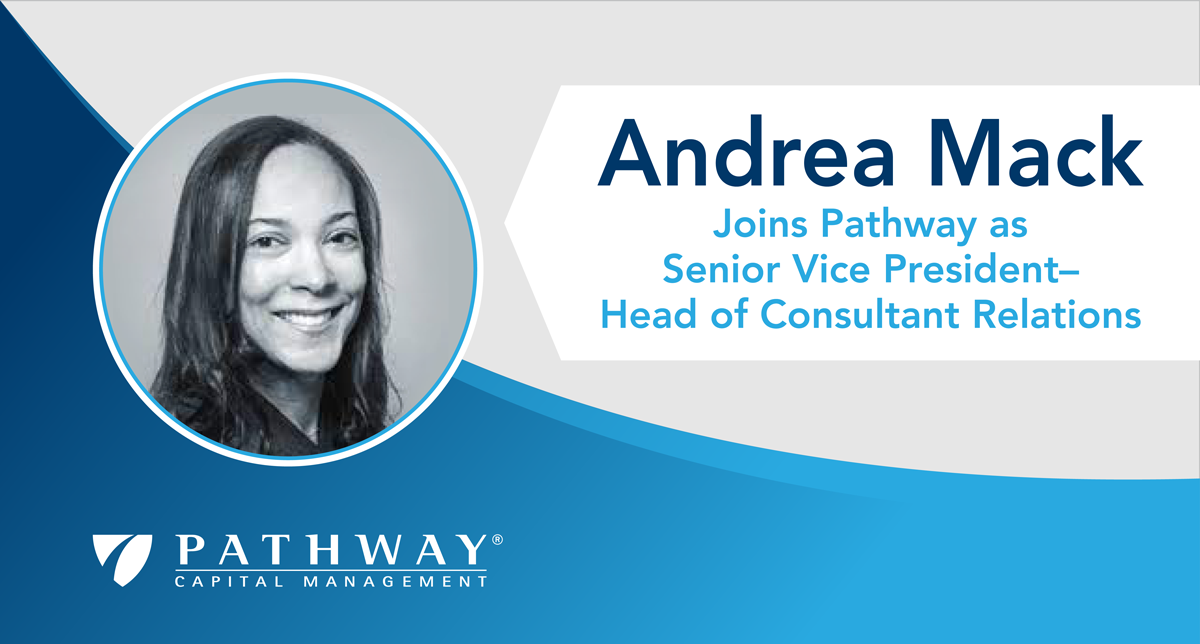 Pathway is pleased to announce that Andrea Mack has joined as Senior Vice President–Head of Consultant Relations. Ms. Mack will be working out of our Providence, R.I., office.

Ms. Mack brings extensive investment management experience that dates back more than 20 years. Prior to joining Pathway, Ms. Mack was a Managing Director–Institutional Marketing and Consultant Relations at The TCW Group and was a Portfolio Manager with Western Asset Management. 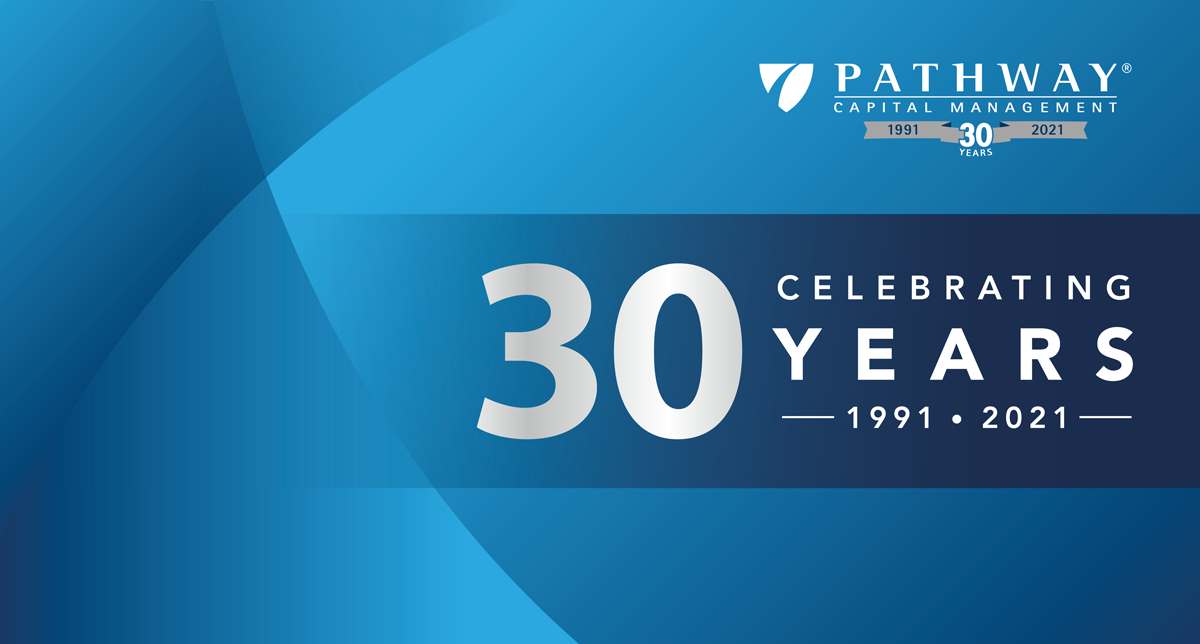 Pathway celebrates its 30th year of developing private market programs for institutional investors worldwide. We wanted to take this moment to thank our clients and investors who have entrusted their capital with us.

Also, in recognition of this milestone, Pathway is making donations to the American Red Cross, which is devoted to preventing and alleviating human suffering in the face of emergencies on a global scale, and the Orange County Rescue Mission, which provides, guidance, counseling, education, job training, shelter, food, clothing, and healthcare to those who are in need. We are proud to be supporting the great work of these two organizations. 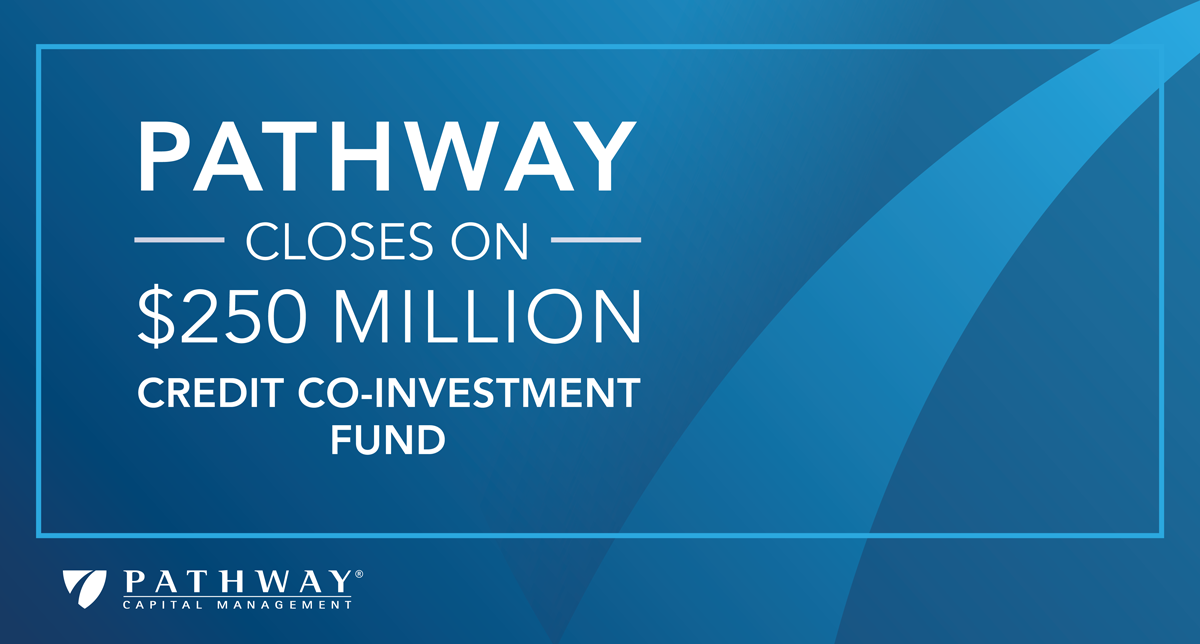 Pathway is pleased to announce that it has formed a customized $250 million credit co-investment fund in partnership with a U.S.-based institutional investor. The new fund will make co-investments alongside the investor’s current portfolio of private credit managers. To date, Pathway has committed more than $95 billion across a wide variety of private market strategies—including more than $5 billion in co-investments—since its inception in 1991.

2020 saw record-high volume of GP-led secondary transactions, and this pace shows no signs of slowing down. Join us as Pathway Senior Vice President Martin Wing moderates a discussion led by Pathway Managing Director Pete Veravanich and Pathway Senior Vice President Mitch Clemente that will provide an introduction on GP-led secondary transactions, including the following:

– Evolution of the Market—Then versus Now
– Trends in Deal Types, Fund Strategies, Etc.
– Opportunities and Considerations for Institutional Investors in the Space 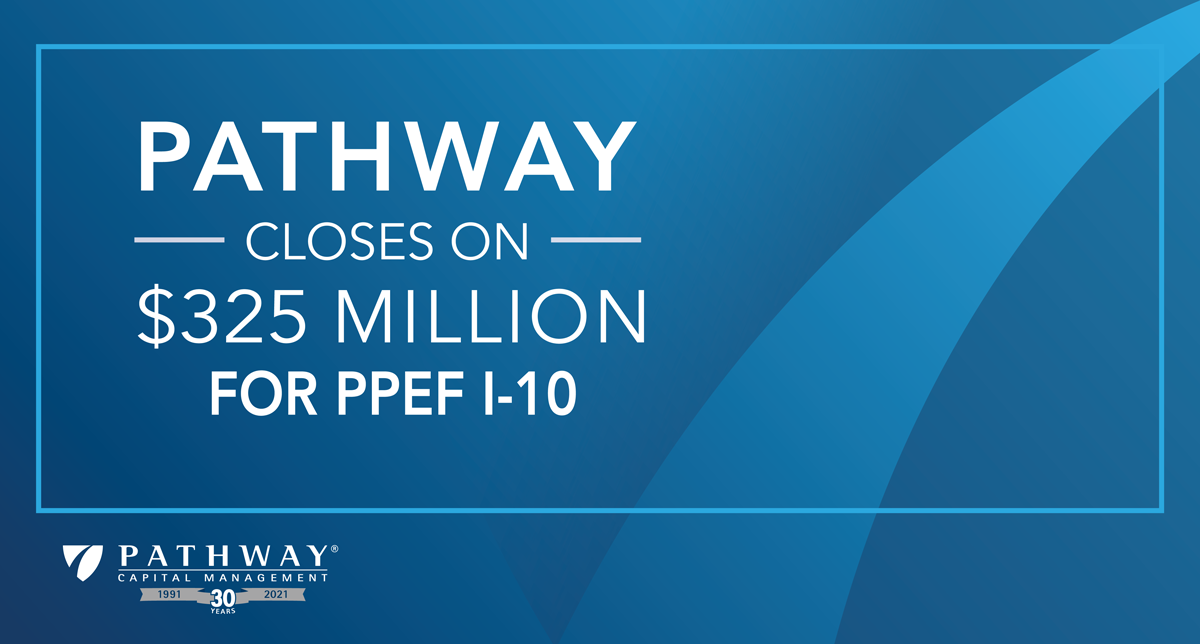 Pathway is pleased to announce that it has held a final close on $325 million for Pathway Private Equity Fund Investors 10, LP (“PPEF I-10”), its 10th multi-investor, core-diversified private equity fund of funds. Investors include a mix of government and corporate pension plans, insurance companies, endowments, foundations, and high-net-worth individuals. PPEF I-10 will continue its predecessors’ strategy of making primary fund investments in private equity managers, as well as investments in secondary and co-investment opportunities.